If you wish to travel with Emirates, you can do so with the help of Airwaysair.com. As one of the best travel group companies in Bangladesh, it is our goal to provide a cost-effective travel package that indulges the customer demands.

Online ticket booking has been the most convenient way of securing a ticket these days. Hundreds and hundreds of people are booking their tickets online. Furthermore, all airlines have adopted web reservations because it is more feasible. You don’t wait in the queue either. This hassle free service is exactly what we are providing at Airwaysair.com. There is absolutely no need to go to Gulshan Avenue just to book or purchase a ticket through the busy streets of Dhaka. Please drop by our agent office or simply contact us. Moreover, you can also book your tickets online. Here is the information regarding Emirates Airlines Ticket Price and Emirates Airlines online ticket booking in Bangladesh.

Note: Only one phone Number is available for the Emirates Airlines Dhaka Office.

Emirates Airlines | The Second Most Expensive Airlines In The World

Emirates is one of the two flag carriers in the United Arab Emirates. The base of operations is established in Garhoud of Dubai. Emirates Airlines is a subsidiary of The Emirates Group. This, in turn, is owned by the government of Dubai’s Investment Corporation of Dubai. Needless to mention that Emirates is also the largest airline in the Middle East. It is operating over 3600 flights per week basis from its hub at Terminal 3 of Dubai International Airport. Moreover, it operates in more than 150 cities in 80 countries across six continents through its fleet. In addition, it has almost 300 aircraft. All the cargo activities are supervised by Emirates SkyCargo. We should also mention that Emirates Airlines has recorded a profit every year with the exception of its second year. What is more astounding is that, since then, the growth has never fallen below 20% a year. During its first 11 years, it nearly doubled in size every three and a half years and moreover, has doubled every four years since.

The Emirates fleet is primarily composed of two wide-bodied aircraft families. These are the Airbus A380 and Boeing 777. In addition, the airline also has the Airbus A350-900, Boeing 777X, and Boeing 787-9 aircraft. It is important to mention that Emirates is, by far, the biggest Airbus A380 operator with 121 aircraft in service. Since the introduction of the Airbus A380, it has become an integral aspect of the Emirates fleet, especially for routes that are not only long but high-density and requires both perseverance and precision from the travelers and pilots. Emirates is also the world’s largest Boeing 777 operator with 155 aircraft in service.

Below we have listed some noteworthy and historical Emirates fleets.

Destinations Around The World for Emirates Airlines

Emirates is the largest airliner in the Middle East. It has over 50,000 working employees worldwide. Emirates Airlines is widely renowned to operate in more than 150 cities in 80 countries across the six major continents. On a weekly basis, it is estimated that Emirates operates about 3600 flights. Listed below are all the countries passengers can travel by flying with Emirates.

Customers traveling in economy class can check in up to 35kg depending on the fare type(Special, Saver, Flex & Flex Plus). Passengers riding the business class can accommodate up to 40kg whereas first-class passengers can hold up to 50kg. Passengers in all three classes can check in up to 10 pieces of baggage as long as it stays within the checked weight limit for their cabin class.

10 Things You Should Know About Emirates Airlines

1. The Largest Fleet in the World

Emirates is one of the very few airlines in the world which only operates a wide-body fleet. As a matter of fact, the Gulf carrier only uses 2 kinds of airplanes, namely the Airbus A380 as well as the Boeing 777. It is vital to mention that Emirates is the world’s largest operator of both airplane types. This makes more than 240 planes in total. One great thing about such an identical flight is that each of the 98244 seats that Emirates offers, is also almost identical. Do note that It is also the only airline in the world where EVERY seat comes with a personal screen! Therefore, you are certainly getting what you pay for.

2. Dubai Airport is the 3rd Busiest Airport in the World

Do you know that Dubai International Airport is the 3rd busiest in the world after Atlanta Jacksonville and Beijing Capital Airport? While it is evident that those 2 airports mostly operate, or rather, handle domestic traffic, DXB traffic is almost purely international. Back in 2016, Dubai Airport witnessed 83.6 million passengers which was almost twice as much as in 2010 albeit only 7 years ago. What’s more bizarre is that out of those 83 million, 56 million were passengers booked on an Emirates flight. The Dubai airport also serves as a hub for FlyDubai which is Emirate’s sister airline.

3. Not Part of any Alliance

This may come as a shock that unlike Qatar Airways and other essential airliners, Emirates is the sole major airline in the world that is not part of any alliance. Although the 3 major airline alliances, namely Star Alliance with members such as Lufthansa or Thai Airways, OneWorld with British Airways or Qatar Airways, and also SkyTeam with Aeroflot or China Southern, have always tried to convince the Middle Eastern giant to join their programs as well as join the team. However, they didn’t find success though their efforts were always in vain. It is reported that the CEO Sir Tim Clark is not particularly a big fan of those networks. He would rather keep Emirates Airlines independent. However, Emirates does possess codeshare agreements with airlines such as Qantas, South African Airways, and SriLankan.

4. Showers and Bar on Board

Now chill out before you get too excited about your next Emirates flight. Access to the shower as well as premium bar facilities are for passengers who spend a few thousand dollars to rightfully acquire a first-class ticket. Note that if you upgraded to actually spending a few thousand dollars on a first-class suite, Emirates still doesn’t guarantee that you get to shower in the skies. Only with Emirates Super Jumbo, the Airbus A380 have a shower on board. Although most of Emirates 777 lineup come with a striking First Class tier, unfortunately, it does neither have a shower facility nor a bar for that matter.

5. Cabin Crew from Over 150 Different Countries

Do you know that the vast majority of the 20000 cabin crew employed by Emirates come from the UK? This is no surprise with an average 20 flights between Dubai and the United Kingdom. You will have at the bare least 12 different nationalities of cabin crew, speaking in between 12 to 18 languages among them, on an average Emirates flight. This is because the United Arab Emirates is an expatriate-dominated society where native citizens are actually hard to find.

Believe it or not but Emirates was founded a little more than 30 years ago in 1985. The airline’s first flight took off on October 25 in 1985 on a Boeing 727, which was provided by the Royal Family to Karachi in Pakistan. Flight EK600 was a historic milestone and the birth of an airline which should 30 years later operate more than 3600 flights a week to 150 cities in 80 countries around the world.

Within 17 hours, you could comfortably fly from London to New York. Afterward, you can have a Starbucks coffee in Manhattan and fly back to the UK. Alternatively, you could fly from Auckland, New Zealand to Dubai on the longest Airbus A380 flight in the world. The inaugural flight EK449 took place on 2 March 2016 and was the longest flight in the world back then. However, it was succeeded by Qatar Airways in 2017 where it began daily flights from Doha to Auckland.

8. A Supporter of Global Football

Not only is Emirates a very successful airline but also an ancient, through and through, well-established brand around the world. Evidently, it has emerged with a big focus on sponsoring sports events and clubs around the world albeit the football teams in particular. This should come off as no surprise that Emirates is one of the main sponsors for the most popular football clubs such as AC Milan, Paris Saint-Germain, Real Madrid, and Arsenal London. The home ground of Arsenal is known as the Emirates which is one of the most modern football arenas in the world. Emirates was also a main sponsor of the FIFA World Cup. Here is a throwback for football lovers. Back in 2014 when Mario Gotze scored the winning goal for Germany against Argentina, the Emirates logo was actually demonstrated on the advertising board just behind the goal and it was seen by approximately 3 billion people all over the globe.

Emirates Airlines also sponsors Cricket Australia, Lord’s Taverners, and Pro Arch Tournament. The branding also features on international cricket umpires shirts. Emirates has also become an official partner of the International Cricket Council till date. This deal gives Emirates association with all major ICC tournaments, including 2011, 2015, and 2019 ICC Cricket World Cups, ICC Champions Trophy, and ICC World Twenty20. Emirates is the Twenty20 shirt sponsor of Durham County Cricket Club and holds the naming rights to the Riverside Ground (now known as Emirates Riverside) as well as the naming rights to the Emirates Old Trafford Cricket Ground. Moreover, it is the shirt sponsor of Lancashire County Cricket Club. Emirates was also the major sponsor of the Kings XI Punjab for seasons 2, 3, and 4. In addition, it was the official sponsor for Deccan Chargers in Season 5 for the teams of the Indian Premier League, regarded as the largest domestic cricket tournament in the world.

Emirates Airlines, the Dubai-based and central air carrier is overwhelmingly popular. It is important to include that the brand itself was valued at $7 billion in US dollars In 2016. Furthermore, Emirates Airlines was also awarded as Skytrax Airline of the year in 2001, 2002, 2013, and 2015. This is the biggest honor an airline can receive within the industry. Every year more than 20 million passengers from around the world are asked to leave their opinion which results in an annual Top 100. In 2017 Emirates was voted as the 4th best airline behind Qatar Airways, Singapore, and ANA from Japan.

1. How To Book A Flight of Emirates Airlines Through Official Website

The online flight booking procedures for Emirates Airlines using applications and official websites are quite the same. Here are the general steps, follow and book the most-suitable flight in no time.

2. Can I Reschedule My Flight

3. Can I Book A Ticket for Emirates Airlines from Bangladesh

3. How to Book an Emirates Airlines Ticket from Dhaka 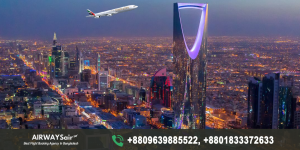 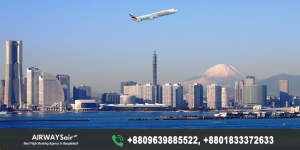